A marathon swim. 10kms. No typo there, but indeed one of those ideas that perhaps seemed rather ‘good at the time’.

… Coming off the back of an unsettling result from Ironman WA ’17, in the sense that that the swim leg was cancelled (my favourite! – new mindset required) and that sunny WA put on a scorcher of a day with a casual 36 degrees, which in turn had its effects; I needed a new challenge to set my sights on.

And so, upon scrolling through the open water swim calendar for events in and around Melbourne that might be interesting, the Mentone Marathon Swim caught my eye. 10kms. Hmm, achievable. It would be the equivalent of 2x IM swim legs + a bit more, or 2x Thursday (day of week sessions are important to note, and Thursday’s – long course, are ok. A double banger Tuesday just wouldn’t fly!) training sessions back to back. Doable. At the time of registering, 3.8kms had been the furthest I had swum in competition, but I’d turned the arms over for 4.8kms or so on occasions in the pool before. I had run 2x marathons off the back of 180kms on the bike and gathered that swimming one would sure as hell be easier. 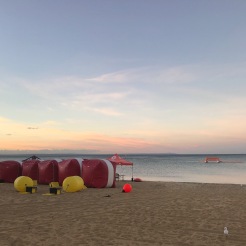 Deceptively calm Beaumaris Bay from the safety of the beach.

Fast forward a couple of lazy months of training, or tapering for better word as life got busy. I had a good 3-4 week lead in of swimming 12 – 16 kilometres each week, including 2x 6km efforts to practise feeding and to get some distance back in my arms. On the side, I was also running and cycling…

In the lead up to the event, I was relatively calm. Ignorance is bliss one might say. But as the morning approached I felt increasingly nervous; perhaps as a result of others’ reminding me that I had this ‘big’ swim fast approaching. However, on arrival to the bay that morning, the water appeared reasonably still from the safety of the beach, the sunrise was pretty and the butterflies subsided. Good news for all.

8.20am – the gun sounded. We were off. From the start, the ocean continued with its glass-like ways. Lovely. The competitors were a bit slower off the mark than usual, with the exception of two swimmers that I saw in the distance. Perhaps this is what pacing for a long swim was? Again, 10kms was new grounds for me and I was there to get this done, and so I was off to find those fast feet (and gentle tow). Coach would be happy.

I caught my target within the first kilometre or so, and sat with him as the waves rolled against us. Have you ever felt as though you’re going nowhere, fast? This was one of those moments. Tough going. Or as I thought, until we made the second right hand turn. Sh$z. I dropped a few f-bombs silently to myself. He slowed and I became inpatient, or more so I just wanted to quickly find smooth water again, so I moved around him and we maintained stroke for stroke with each other for a while. We breathed opposite sides, so we got to enjoy each other’s faces sucking in air (and the waves) for a good while. Lucky us.

Catching a glimpse of fresh legs coming through, I moved in to lighten my load across the choppy back stretch but lost his wake (by choice) as he went in to refuel. I was feeling good and had found my stride so I continued into lap two on my own, which is pretty much where I sat for the rest of the event, – solo.

And so for the rest of the race, a similar pattern unfolded. Beautiful flat conditions across the front straight. First right hand turn – into the waves for what felt like forever and going nowhere fast. Every. Damn. Time! Second right hand turn, more chop to contemplate – through, or over/under, – whichever best helped you survive. Third right hand turn, back to those welcoming smooth waters, forth right hand turn, home straight. Get a hold of yourself to do this all again, twice!

For me, the demons began to set in around the 7kms mark.  During the event briefing, the race official so kindly assured us that everyone’s a winner; ‘there are no non-finishers, everyone get’s a time’.  This pretty much says that once you’ve had enough, you can simply pack it in at anytime – 2.5km, 5km, 7.5km or 10km.

Admittedly, 7.5kms was looking like a rosy option on occasions. I wasn’t dying, my arms were still ticking over and clearing the surface, and that morning I’d just told the social media realm that I was doing the mara event with a pretty capture of that deceptive looking bay at sunrise. Damn Insta! So I pushed on, got comfortable with being uncomfortable and sucked it up for another 40 minutes or so. Surprisingly, I had found good steam toward the end and finished strong. Just keeping enough in reserve for a little race to the end against another competitor. Much to my (pleasant) surprise, I had managed to hit the top step. 1st female and 5th overall (wetsuit category). With much thanks to coach ASF Tri for his hard work and patience with me these previous months. Needless to say I was relieved; – that those near 3 hours of smashing through the chop was behind me, as well rewarded with a podium. Marathon swim done!

It’s a good feeling however I won’t be hurrying back for another anytime soon. For now, I shall nurse my shredded neck (thank you wetsuit, again) back to good health and enjoy a little rest before I teach my legs how to pace for 21kms again with a 70.3 just a few weeks away.

Oh, and for the record. This swimming mara business does feel much easier than smashing out 42kms on land.

*Just like that – ha, I wish… It might be worthwhile mentioning that there has been months and months of hard work banked (swim, bike, run) in the lead up to IMWA, as well keeping somewhat fit following.

it hurt as bad as it looks!

Join 320 other followers
Follow tri this world on WordPress.com