The Beginning of the End (My Savings Plan).

Triathlon. 3 sports in one, thrice the crazy and 3 times the fun. Definitely something that I would encourage everyone to try their hand at just once. No matter the distance or speed, rather just the best effort you can produce on the day. Because more than likely, it will hurt-so-good and you will question your sanity (or insanity), but it won’t be your last.

There’s something about this sport that keeps you coming back, time over. It will empty your pockets (you just gotta learn to say ‘no’ to the shiny new gear), it will challenge you, the most fun and supportive sporting community will pull you in, and it will change you.

In July this year, I would have been a part of this ‘tri’ community for 2 years. My first race wasn’t until November ’16 – a sprint distance event in Melbourne’s bayside. My next event would be the Western Australian Ironman, just a few weeks later… 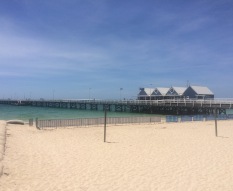 Eye on the prize – Busselton, WA.

In this post, I’m going to share with you how I got involved in this lively world of tri and became one of those people who say ‘the early bird gets the worm’ – sometimes. 🙂

Probably a little left field than most people, but hey, it worked for me and goes a little something like this;

My friend had been involved in triathlons for a little while and was really enjoying it. He was training with one of the bigger Melbourne clubs at the time and I’d listened to his training regime, which sounded just intense and ridiculous at the same time. Who in their right mind would exercise like that by choice right?! I went along to one of the club’s social events – barefoot bowling – (I like beer and bowls), and was really taken in by how kind and down to earth the people were. Of which, were not all rocking ripped abs as I would have then expected a triathlete’s bod to be. Yet, healthy bodies of various shapes and sizes who were just chasing their own best. Big tick!

I remember being super excited for him – (so much so that I got down to the beach at 5am on a Sunday to see the event start) and was so impressed with his effort and thought, ‘hey, I’ve always wanted to do a triathlon, I can do this’. Competitive swimming was my background, I’d always enjoyed running growing up and did the very occasional fun run here and there (once a year if I was lucky), and I rode my bike around the farm as a kid… The similarities are just uncanny!

His goal was to do an Ironman and we spoke about this on and off. Western Australia – December 2016 was the prize. In passing conversation, an off the cuff comment was made, ‘you won’t do an Ironman’. Said more like a rhetorical statement with a pitch of challenge behind it. And it was those few words that planted the seed.

It’s probably worth noting that I’m quite the stubborn kind and do love a bit of friendly competition, and quite simply, I just couldn’t let him have it. This was ridiculous however. For nothing short of a couch potato to swim 3.8kms, cycle 180kms and then run a marathon – 42.2kms, consecutively. I’d need to somewhat consider this… as well agree on a wager. 😉

As the event drew nearer, I read my fair share of ‘how to train for an Ironman’, blogposts and articles, and came across a convincing article by Holly Ransom that drew similarities between training for an Ironman to management in the workplace. I was sold. Ironman Western Australia ’16 – I’d be coming for you too!

And so, first things first; enlist a team of people who knew what they were doing, because I sure as hell didn’t. Just a girl on a mission to prove a point.

I joined the local triathlon club that my friend had since moved to, and paid some extra money (goodness, this was the beginning of the end – my savings plan!) for a specialised coaching program from the head coach. Smart move.

In order to get on board, I had to tell him a little about myself and my sporting history. It was a little embarrassing really, and confronting to admit that I’d really been quite the loafer these past years. I drew on my ‘used to, has been’ sporting accolades as a teenager. I was then 29 so irrelevant really. Looking back on that interrogation to my previous inactive lifestyle, I’m impressed with my positive approach however. ‘Do you own a heart rate monitor?’ – ‘not yet’. Ha, makes me smile.

At first, he was reluctant to entertain this Ironman in sub 6 months idea. Given his shiny track record of Ironman finishers (I was on to a good one here!) and taking a punt on what could have quickly become a liability – me, I can understand why. But to his credit, he sat me down with a detailed plan and explained the ins and outs of what would be required to get me to the start line, as well rough costs, balancing life/work etc. It was busy and would be a shift from life as I knew it, but I was committed. And so, ’20 weeks to glory’ unfolded. What a ride!

Join 320 other followers
Follow tri this world on WordPress.com