The Passo dello Stelvio. Just wow. Standing high up in the alps at 2758m above sea level, this mountain is among the holy grail of climbs for cyclists across the world. A long and steady ascent with an average gradient of 7%, and impressive landscapes of the Bormio valley from the very moment you roll out of the door, makes it one of the most beautiful and challenging climbs one could do.

There’s no questioning that it’s hard word. 60 hairpin turns will keep you honest (48 of which are numbered on the most northern section – so best not to countdown ;)), as will a max. gradient of 12% and 1558 metres of elevation. The climb is 23 kilometres long from Bormio, which is where we began, and a single ascent will likely empty your tank and make you question your sanity. A double; – impressive, though perhaps just senseless?

And so the saying goes – ‘if if doesn’t challenge you, it doesn’t change you.’ There in the moment, in this beautiful corner, it was never really an option (for us) to not get totally wrapped up in the stupidity of doing two. Without doubt, it was the hardest day of cycling that I’ve ever done, yet the most scenic and memorable in more ways than one. Would I do it again? Definitely! 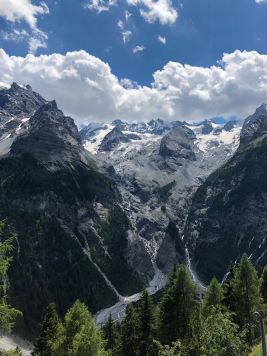 There had been a lot of chat about the Stelvio prior to the cycling camp commencing and we knew this would be a unique experience. The option to tackle the double ascent would involve climbing to the summit of the Stelvio (or just shy of) from the Bormio side, a descent into Prato, Switzerland and then a climb to the top again via the Passo Umbrail, and then a final decent home into Bormio. It would be a 100 kilometre day with 50 kilometres of climbing and 2684m of elevation gained at an average gradient of 7.5%. Phew.

We set off from the hotel at 9am and from that moment we were pretty much on our way up. It wasn’t long before the group split and we had found our climbing buddies for the day.

From the get go, the ascent was picturesque. Like something you would see on the silver screen (because we had – James Bond amongst others, as well in every major cycling brands seasonal advertising campaign). The climb was a surreal mix of switchbacks, false flats, true flats and some welcomed downhills. For 23 kilometres to the top, we enjoyed views across the valley.

It took around 1.5 hours to reach the summit, averaging around 13 kilometres p/hr. The road was busy with other keen cyclists from throughout the world seeking similar thrills, as well luxury cars and motorbikes. In saying this, it was comfortable with plenty of room for all, and at times social, – a few ‘ciaos’ and some banter between breaths. 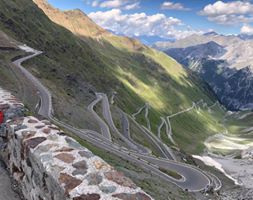 From where we ride.

Our support van met us at the turnoff to the descent into Switzerland. This was a short break to regroup with those keen for the double ascent (6 of us), to throw on some layers and to take in some fuel.

It was downhill time. What a treat. No climbing for a half hour or so, and stunning landscapes for the entirety; beautiful Brown Swiss cows wearing bells throughout the fields, rolling hills and snow-capped mountains, and quaint colourful country homes. However, as much as my legs enjoyed the rest whilst descending, I knew that whatever ground we covered, we would need to come back up…

After a quick pit stop in Prato for coffee and a few bites of a sandwich, we were straight back out there for the second ascent of the mountain. This time from the Swiss side, via the Umbrail Pass.

The Umbrail Pass sits right on the Swiss-Italian border and connects the village of Santa Maria, Switzerland with the Stelvio Pass road, as well Bormio, Italy. It’s currently the highest paved road in Switzerland at 2501 metres.

13 kilometres, 35 hairpins and an average gradient of 8.5%; this mountain took me for everything I had. Having heavy legs probably had a lot to do with it, as well not taking in enough fuel in Prato, coupled with the beaming sun, – particularly in the early stages of the climb. This was without doubt the hardest climb I have cycled, and I would think that in terms of heading to ‘dark places’, this experience is on par with completing a couple of full distance Ironman events.

As soon as we left Prato around 12pm, the temperature was beginning to soar. It would have easily been 30+ degrees on the floor of the valley. For the initial stages of the climb, we cycled in the raw heat of the hot sun for what felt like forever; – perhaps 10kms.

A tunnel through the mountain provided instant relief for a short while, until we were reacquainted with the heat on the other side. This was going to be a tough afternoon. To help detract from those hurt locker feels were the impressive views of the snow-capped mountains and an eternity of greenery. Feeling incredibly small amongst the mass formations of these alps and their beauty, we continued to inch our way to the top. A friend had told us that the locals nicknamed the alps ‘the massives’, (pronounced with a beautiful Italian accent of course), which also suggests their feeling of minuteness within their vastness.

The kilometres ticked by, as did the hairpin markers. Slowly. When you look up to see there are 30+ hairpin turns until the top, it’s not entirely encouraging. When you look down, there is the cliffs edge, that drops hundreds of metres below, lined with a single steel barrier. Comforting. However, that aside, we kept grinding… Sometimes as slow as 5km/hr and less. I remember thinking that I could easily outrun my moving speed on the bike, and there was no way in hell I would be collecting medals for my Strava trophy cabinet! 😉

Some hours later, we reached the top. For me, the feeling was just relief. I had nothing left and needed some moments to gather myself for the descent home. Whichever rock stars thought it would be a fabulous idea to offer bratwursts at the summit, kudos to them! What a treat to feel human again.

Careful to not get too cold, and mindful that the descents are quite the fresh roll home with the cool alpine air and wind against us, we didn’t hang around for too long. 23 kilometres of descending with picturesque views once more, as we made our way back into Bormio.

It was a big day out to say the least. 5+ hours in the saddle and 3599 metres of elevation gained in one of the most beautiful corners of the world. Passo Umbrail, what a beast. I’d love to come back and beat it better a second time around!